I had written an article on Notepad Tricks and many people requested me to write more of these tricks. So here are 5 more tricks for Notepad, and this time its only .bat files which means all tricks are done using command prompt.

Type the following in notepad:

Save it as color.bat
Open the .bat file and select your number 1,2 or 3 for the colors.. or 4 for exit.. It will print a specific text in a desired color…

You can change the bold text to your choice.

Type the background color followed by the text color. For example, if you want a black background and green text then type the color as 02 …..

In this manner you can make any Diagram you want with notepad. If you want a transparent notepad to outline a picture then you may try Glass Notepad. I used this to quickly sketch on the logos and make this.

Normally when you try to start a program such as firefox, then it goes through some levels.. But you may be wanting to start some programs such as, check windows firewall or registry editor.. These files are located in System32 folder and opening them manually is a headache.

Here is a simple way to make your own portable program starter:

Try it and replace the values in bold to your choice…

Advanced users can check their ip configuration whenever they want. This is really helpful for people who try to mask their IP many times or people who have a dynamic IP.

Open notepad and type the following:

Save this file as IPconfig.bat and run the file whenever you want to test your internet configuration…

Lets say that you have visited a web site and you don’t want anyone else to know what site you’ve visited. A few things are, clearing all your web browser temporary files, clearing thumbnails, etc. But did you know that this data is stored on your Internet Server as well ? This means if you’re using Airtel Broadband, then they’ll keep track of what you’ve seen and save it for future use.

To check what files are stored, just check your dns using the following code in notepad:
@echo off
ipconfig/displaydns
PAUSE

Save the file in notepad as CheckDNS.bat and run the file.

To clear this, just clear your dns using this simple code in notepad:
@echo off
ipconfig/flushdns
PAUSE

Save the file as clearDNS.bat and run the file.

This will clear your DNS cache completely.

Try them out and tell us how you liked it…… 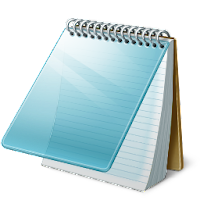 Notepad is the default text editor in the Microsoft Windows OS. Many people prefer alternatives to notepad such as Notepad++, but did you know that notepad can do much more than just view and edit text ? In fact, I’ll tech you how to make a fake virus using notepad so that you can fool your friends 😛

Here are some awesome trick you can do with notepad…..

1. Log Diary Trick
Have you ever wanted to make your own diary on your computer ? Why not try notepad..

2. The 4335 Rule
This trick may not work on all computers
This has been surprising users for quite some time. When you enter a few secret codes, notepad hides them.

Can you read it again ? This is called the 4335 Rule. This means, if the first word is four words, the second and third as three words, and the fourth as five words, then you follow the 4335 rule and the text is hidden.

The same happens with this app can break.

3. Open a file using notepad
Here is a simple trick to open any file or program with notepad.

Open notepad and type the following:

Then save the file as Shortcut.bat
Please note that the file type should be kept as ALL FILES while saving it as a .bat file.

Change path of file with your actual file path. For example if you have a file called run with an extension .exe in the folder TEST in C:\ drive, then your path should be something like this: C:\TEST\run.exe

If you want to open some complicated programs such as Firefox, then use this code:

Change path of folder with the actual path of the folder, and put the name of the program with its extension. For example if you have a file called run with an extension of .exe in the folder TEST in C:\ drive, then your code should be something like this: START /d “C:\TEST” run.exe

4. Make Questions
Want to make something interactive ? Need to make questions ? Here is an example of a question made with notepad where the user got the answer correct. To do this, just type the following code in notepad.

Now save the file as Question.bat and run the file.
Please note that the file type should be kept as ALL Files while saving it as a .bat file.

You can modify the code for your convenience. Change the bold text and try it out.

Save this file as Matrix.bat
Make sure the file type is kept as ALL FILES while saving it as a .bat file.

Open the saved file and see the magic. Type in the following in notepad:

Save the file as Matrix2.bat and run the file.
The file type should be kept as ALL FILES while saving a .bat file.

7. Lock Folders using Notepad
This trick may not work on all computers

Lets say you want to lock a folder named PICS in your D:\ drive , whose path is D:\PICS

Pics is your folder name. Use the name of the folder in place for pics. Save the text file as lock.bat in the same drive.

To unlock this locked folder:

Save the text file as key.bat in the same drive. Here again, pics is the name of the folder. Change it to the folder you want to lock.

8. Make a fake Virus POP UP
Type the following code in notepad:

Save the file as pop.bat and run it. You should get two pop up messages. There has been an issue on some computers, but it should work on most computers. Type the following in notepad:

Save the file as virus.bat and run the file.

Save the file as virus-test.txt
Scan the file. If your antivirus detects this file as a virus and tries to remove it, then you can be sure your antivirus is a good one. This is a much easier way, than actually downloading a virus to test it. This sample virus code is perfectly harmless and allows you to test your antivirus. A good antivirus like MS Security Essentials will detect this test virus even before you scan it.

That’s all the tricks I’m sharing, at least for now. All the tricks above are perfectly safe and will not harm your computer in any way. There are many destructive notepad tricks as well, like making a real virus which kills the Operating System, but personally, I believe that is only meant for developers who want to make their OS security better. Use these tricks in your best behavior 🙂

Try these out and give us your comments……